Local Payment Methods in Singapore: How PayNow Works in an International Payment Gateway 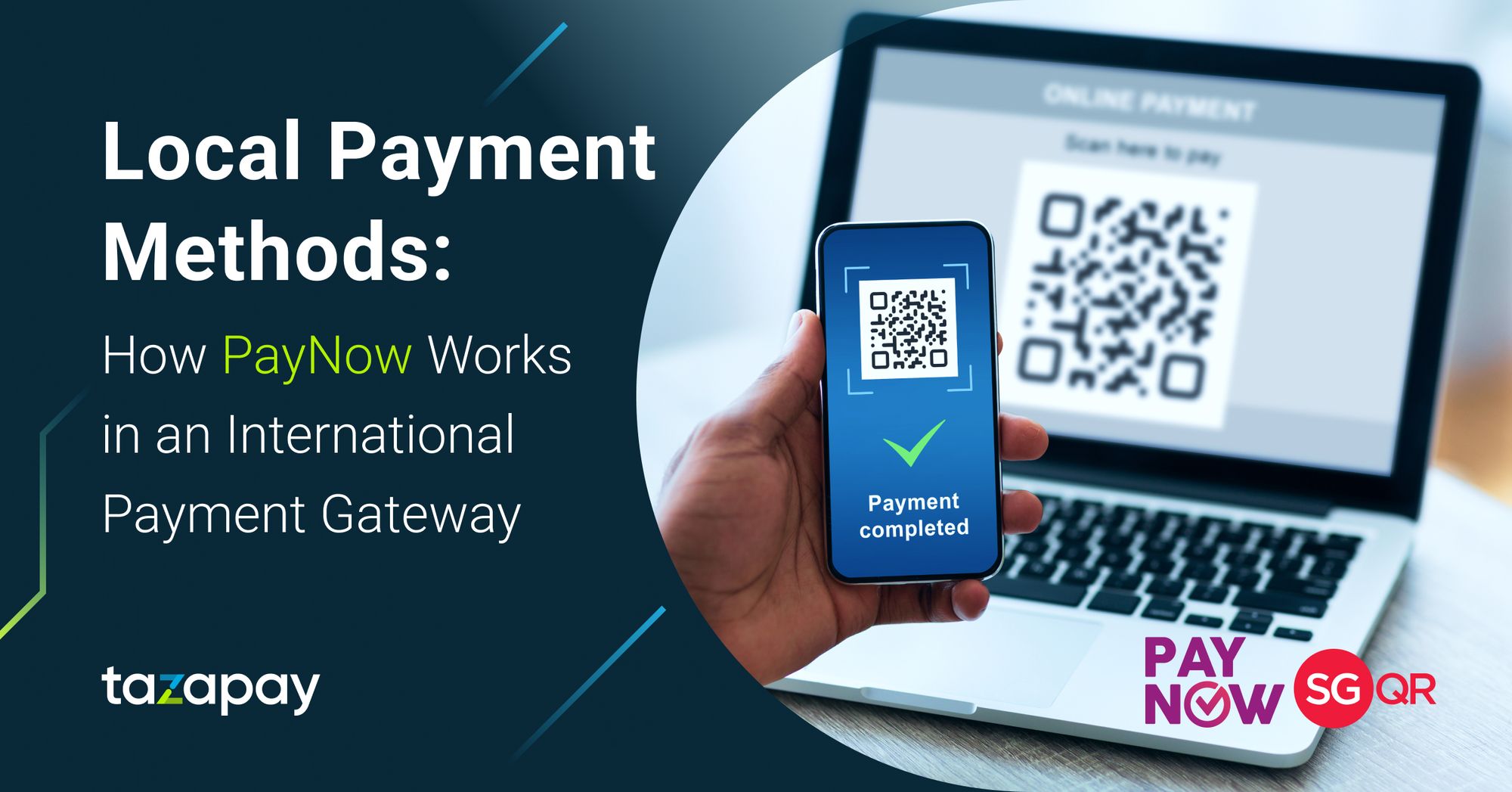 In Singapore, the current online payment trends for the island nation predict a significant increase in the use of digital wallets as a payment method, potentially overtaking card payments as the dominant payment method of choice by 2024. With the government implementing initiatives to build up a robust infrastructure for cashless payments, this prediction may come to pass. One of the payment methods that have risen in popularity in Singapore is the QR code payment via the unified Singapore Quick Response Code (SGQR) which has enabled the swift adoption of QR payments across the nation¹. Among these payment platforms borne from this initiative is PayNow, which also offers QR payments with PayNow QR².

What exactly is PayNow and how does it work in an international gateway?

Localising into a new market is hard, bothersome, and a hassle. Everything from payment methods, fees and payout methods. Then why not consider Tazapay? Tazapay takes all of those concerns and makes them simpler, streamlined and more manageable with only a single account. Still have doubts? Contact us today.

According to the Association of Banks in Singapore (ABS), Paynow is a near-instant real-time payment system that facilitates both inter-bank peer-to-peer (P2P) and person-to-merchant transactions³. It is regulated by the Monetary Authority of Singapore (MAS) and is supported by all major banks in Singapore and a few non-financial institutions³. Most transactions made with PayNow utilise SGQR-based QR code payments though most P2P funds transfers can also be conducted via virtual payment addresses (VPA) such as a user’s phone number, national ID number, or UEN.

PayNow being part of the Singaporean government’s initiative to create a robust cashless infrastructure means that trends regarding its adoption rate will be overwhelmingly positive. Indeed, this is reflected in the volume and value growth of PayNow transactions between 2018 and 2021 whereby they experienced roughly 380% and 641% rise in transaction volume and value respectively⁴. However, both also saw a slight dip between 2020 and 2021, peaking in the latter and dropping in the former though this is presumably due to the gradual easing of Covid-19 lockdowns allowing consumers to rely less on online shopping⁵.

However, this does not mean that user growth is dwindling. If anything, it is expected to soar even higher as indicated by the Straits Times when they reported that PayNow transactions alone had blown through the SGD20 billion mark last year⁷. Most users of PayNow, consumer and merchant alike, tend to vary from young adult to senior citizens, and typically have easy access to the internet. Normally, the older generation would find it harder to adapt to these financial changes but Singapore’s small population size combined with its tiny landmass makes the government’s efforts to have high penetration and adoption across the board easier.

Creating a payment link to accept your buyer’s currency is never easier with Tazapay! Simply input your transaction details and generate a unique URL for your customer to pay into in a few clicks. Learn more about Tazapay’s payment links:

Benefits and Drawbacks of using PayNow for Online Payment Gateways

No payment system is perfect and PayNow is not an exception to that rule. Here are the benefits and drawbacks to using PayNow:

How PayNow Works in a Cross Border Payment Gateway

When conducting transactions with PayNow, one may realise that it is not possible to directly make international transactions with it. This is because PayNow only works between Singaporean bank accounts due to its nature as an inter-bank system, with the exception of the PayNow-PromptPay corridor for P2P transactions between Singapore and Thailand. However, one can easily circumvent this problem by making use of a third party provider, like Tazapay, since the third party provider acts as a payment provider for the international payment gateway.

Using Tazapay as an example, how PayNow would work in an international payment gateway begins with transferring funds via PayNow into Tazapay’s Singaporean account.

This is done by scanning the QR code that leads to the user paying the checkout amount within the PayNow app.

The funds are then moved into one of Tazapay’s numerous international accounts before being disbursed to the foreign seller’s bank account.

What are the Fees Required in Using PayNow? Does it Differ for International Transactions?

At the time of writing, local PayNow transactions are charged at SGD0.50 per outgoing transaction via most major Singapore-based banks, and fees to receive Singaporean payments via PayNow are waived until 2025.

However, when making international transactions via third party payment providers, the usual costs of using such providers apply, including setup fees if any. For instance, Tazapay charges 1.8% for all local payment methods that aren't card-based. This is a much lower rate than card transaction fees, which can range from 3% to 5%, not accounting for FX conversion costs as well.

Some payment providers, like Tazapay, make the integration process as hassle-free as possible by being the 3rd party that processes payments on behalf of the seller, therefore making them ideal for any business wishing to integrate a payment platform into their own payment system.

Now that you are better educated on PayNow, you may now look forward to your own efforts in localising into Singapore. However, if you’re on the lookout for any reliable third party payment providers that have PayNow as a payment method, why not give Tazapay a go? Localising your business with Tazapay would leave you spoiled for choice as it offers a selection of over 84 localised markets to choose from. Try Tazapay today!

Local Payment Methods in Singapore: How PayNow Works in an International Payment Gateway Local Payment Methods in Europe: How Trustly Works in an International Payment Gateway

Europe is home to some of the largest eCommerce markets in the world, boasting a total market revenue value of USD 602.20B in 2022, and a user penetration rate of 61.6% that same year¹. This amazing market health can be attributed to the fact that across Europe, the three main forces that drive e-payment adoption and development–regulatory nudging, consumer interest, and merchant interest–are all present in spades, thereby driving up digital penetration rates in the region². One notable digital Local Payment Methods in Thailand: How PromptPay Works In an International Payment Gateway

Thailand is entering the dawn of an era of digital payments after being a cash-reliant economy for so long. Over the past six years, the country has worked hard to roll out financial technology services and the penetration of said services into their populace¹. This is evident with the 2022 statistics regarding the percentage of internet users in Thailand which reports that 77.8% of the country’s population of 70.01 million are avid users of the internet and presumably digitally literate². One o

Local Payment Methods in Nigeria: Top Banks You Should Know for Your Online Payment Gateway

Global trends towards digitisation have led many to explore more effective ways to do business online. This trend does not escape the African region, and in spite of the volatile currency fluctuations of the Naira, Nigeria is emerging as an attractive contender for expanding one’s eCommerce business. Digitisation has led to Nigerians innovating and adopting new payment methods in spite of infrastructural setbacks. Some of these banks have even adopted pioneering technologies to empower their u